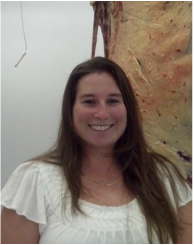 Samantha “Sam” Belanger is from Tampa, Florida. She grew up showing horses around the southeast, moved to North Florida where she became highly involved in FFA; showing and raising Yorkshire swine. Sam attended Auburn University and received her BS in Animal Science with an emphasis in Meat Science. She was president of Block and Bridle, Meat Science Club, and Collegiate Cattlewoman’s. She competed on the Auburn Meat Judging team as well as the Academic Quadrathlon team, where her team went to the Southeastern Regionals.  Besides her love for the meat science industry she has played rugby for 4 years at Auburn and continues to play today (when time allows).  Sam is a huge sports fan and don’t beat her up for her love of Orange and Blue. As she would say “War Eagle!” Sam is currently employed as a Meat Scientist with FPL Foods LLC, one of the largest privately owned beef slaughter and processing firms in the US. Fortunately StelzLab still gets to work Sam on a regular basis.